In the December 2022 issue Eddie Fahmy, CEO of A2Z Restaurant Consulting and co-founder of Dinevite.me [an easy-to-use online promotion tool for restaurants] was named Entrepreneur of the Year 2022.

The magazine profiled Eddie’s career highlighting him as a visionary, with the discipline, management skills, and fortitude to navigate barriers.

During the interview, Eddie noted that:

Entrepreneurs that are successful do what they do because they’re passionate; they’re driven by the love of doing it, not any ultimate benefits obtained

Entrepreneur of the Year 2022 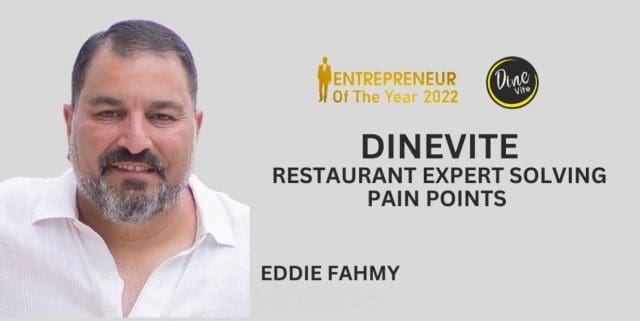 They discussed his transition from restaurateur to restaurant consultant and the changes he had navigated to be able to take his career-long experience and apply it for the benefit of his clients.

Not only does he guide clients and help them navigate past the many pitfalls inherent in launching a restaurant. but also provide a fresh pair of unbiased eyes to reveal what they need to know instead of just telling them what they want to hear. This can include concept, location, aesthetics, and much more, right down to the detail of their online presence and robust marketing plans.

He is also a fierce negotiator when it comes to vendors, often getting them deals far better than they expected, especially facilitating free promos for the grand openings.

But it wasn’t just his career as a self-made and impressive restaurant consulting career that caught CEO Review Magazine’s attention.

After years of serving restaurants as well as running his own, he noticed a specific pain point most all of them suffered when it came to promoting their restaurants, including the high cost of deliveries. The inflexibility of promotion platforms to allow restaurant owners to promote when and how they choose to — promoting during slow times, but not during busy days and times — it what gave him the idea for Dinevite.me.