A2z Restaurant Consulting teams up with Amazon to run the restaurant side of an event for promotion in New York City.

Amazon Prime wanted to run a promotion for the second season of their hit show The Marvelous Mrs. Maisel. The idea was to launch a promo that recreated something from the 1950s era, the period in which the show takes place.

An idea was hatched to create a POP UP for one week of the legendary Carnegie Deli, in New York City. Amazon needed a firm to run the restaurant side of the event, so reached out to Eddie Fahmy, the president at A2z Restaurant Consulting to navigate the health department requirements, handle staffing, the front of the house seating, the POS system, and general management of, well, everything.

Eddie Fahmy, president of A2z Restaurant Consultants said: “We’re thrilled to be involved with Amazon Prime on such an innovative concept.” 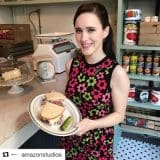 The Marvelous Mrs. Maisel — at Carnegie Deli, a POP UP in December 1018

Since its announcement, the excitement around the event has ignited chatter among the news media. The event has already been covered by BCS, NBC, and many others. (See below).

Be sure to follow us on social media at:

Check out our client portfolio |  See the Event Result |  Contact us